(Office of the President)

Today, 9 October 1999 is the 37th Anniversary of the Independence of the Republic of Uganda.

The Uganda Peoples Congress (UPC) was the leading political Party in the struggle for Uganda's Independence.

It is the mission of the UPC that the Independence of Uganda means that, at all times, every citizen of Uganda must be independent, enjoy and exercise the inalienable, God given, human rights and freedoms.

Since January, 1986 - now over 13 years - the UPC has been engaged in campaigns for the third liberation of Uganda in 37 years and the Party is again leading the people in campaigns to rid Uganda of a dictatorship imposed by an insurgent army.

Between 25 January 1971 and 11 April 1979, the UPC led the people of Uganda against another military dictatorship. 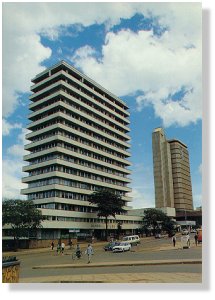 The economy grew at an average rate of 6 percent annually and the standard of living steadily rose every year.

When the UPC was elected to office again in December 1980, the UPC inherited a shattered economy, an enfeebled and disrupted administrative infrastructure and the social fabric stretched to the limits of endurance by eight years of brutal oppression and incalculable loss of lives through a reign of murder and terror.

The UPC government published its Rehabilitation Programme in February, 1982. Because the Programme was well received and highly supported by the people, it was revised in 1984 when additional projects were added.

The vigorous implementation of the Programme by the government, Parastatal organisations, private c,ompanies and, above all, the people put the economy on the upswing again by 1984. The balanced budget presented to parliament in June 1985, for instance, estimated growth rate of 6 percent and a reserve of $30 (thirty) million US dollars for the following year.

Like the UPC, military dictatorship has also ruled Uganda twice. 0n each occasion, there have been genocides, massacres, despoliations and abject poverty. The head of the first dictatorship was given the accolade of "Gentle Giant" by the older democracies who later, after he was overthrown called him Buffoon and a dictator. The head of the dictatorship since January 1986 has been given the accolade of "New Breed" by the older democracies.

The Uganda New Breed has fought wars against disparate adversaries in all the four regions of in Rwanda, in Zaire and is still fighting wars in Uganda, in Sudan and in the Democratic Republic of Congo (DRC). In all the theatres of war in which the army of the New Breed has fought or is fighting, the nature of the atrocities has been the same, and also the same has been the heaping of all the blame onto each of the disparate adversaries by the older democracies.

It was the Uganda New Breed who originated and nurtured the culture and scourge of rebel armies together with the despicable recruitment of child soldiers.

In the past over 13 years, the Uganda New breed has instituted an immoral tenet of governance namely, corruption and nepotism.

In the Uganda Constitution, promulgated in 1995, the Uganda New Breed has inserted a provision which stipulates that no citizen of Uganda is born with the inalienable, God given, human rights and freedoms unless it is proved otherwise a referendum. The older democracies support the referendum, which means that it is their position that the provisions of the UN Declaration of Human Rights Charter do not apply to the people of Uganda

Except for Uganda and Rwanda, which is a satellite of the Uganda dictatorship, foreign aid from the older democracies to African countries is on the conditionality that the recipient government respects and observes the human rights of the citizen. Uganda and Rwanda have been, perhaps because they are dictatorship exempted, from the conditionality.

Death on a massive scale, suppressions of human rights, removal of the political Party from politics and elections and the demeaning and dehumanising referendum to deprive and divest the citizen of the power for him or her, alone, to determine the nature and level of the enjoyment and exercise of his/her human rights, have been presented to the older democracies by member, of the UPC and by me.

The UPC Website is launched today, 9 October 1999 to increase the capacity of the UPC to take the appeal to the taxpayers in the older democracies.

It is the money of the taxpayers in the older democracies which has been used, is being used and is likely to continue to be used to entrench a genocidal dictatorship which has desolated Uganda, Rwanda, Democratic Republic of Congo and Southern Sudan.

The people of Uganda, like the taxpayers and people in the governments in the older democracies, are part of the human race.

On behalf of the members of the UPC and on behalf of the people of Uganda, as a whole, I send the appeal through the UPC Website that tax money of a free person be not used to suppress human rights in Uganda.

Your freedom as an individual is not complete unless there is also freedom of the individual in Uganda.

FOR GOD AND MY COUNTRY.